There’s a sign in Wayne Strattman’s studio with six words spelled out in slender glass tubes: helium, neon, argon, krypton, xenon, mercury. Each is lit up with the gas it describes. Helium glows a light peach; neon, the most common, blazes red-orange. Krypton is white, argon is fuchsia, xenon a muted blue, and mercury a bright azure. Although, technically, mercury is not a gas. “It’s a vapor,” says Strattman.

A sign on the wall of Wayne Strattman’s studio shows the different plasma colors of different gases. (Robin Lubbock/WBUR)

Strattman is a glass and light artist. He has designed museum displays, toys and set pieces in films. (The green glowing lights in the Borg regeneration stations in “Star Trek VIII: First Contact”? Those were his.) His 1,500-square-foot studio at 119 Braintree St. in Allston brims with discarded prototypes and glass sculptures. Strattman is especially fond of decanters, which he keeps clustered on a shelf. Inside one is a small figure — a man, with his hand outstretched, holding a deep red heart.

“I originally made this decanter to give to somebody I was dating,” Strattman says. “And she broke up with me, and I took it apart, drilled a hole through the heart and put his heart in his hand. This is called, ‘Can I give you anything else?’”

Strattman, as you may have guessed, is not the type of guy to feign optimism.

Wayne Strattman’s glass sculpture of a broken-hearted man holding his heart is called “Can I give you anything else?.” (Robin Lubbock/WBUR)

He has every reason to feel pessimistic at the moment. The building where he rents his studio is set to be torn down and redeveloped into lab and office space, causing over 100 artists and craftspeople to lose their workspaces. Strattman despairs that he won’t find an affordable replacement. And it’s not for lack of trying.

“There isn’t a community, quite honestly, east of the Connecticut River I probably haven’t been to,” he says. “The for-sale prices are astronomical — they start well into the millions, largely, and the leasing rates are high. And also, lab space is being claimed from Boston, basically at a radius of about 30 miles in any direction. So they’re taking up all the small commercial spaces and driving the cost per square foot up to $30, $35, $40 a square foot. And artists just don’t have the income to support that.” 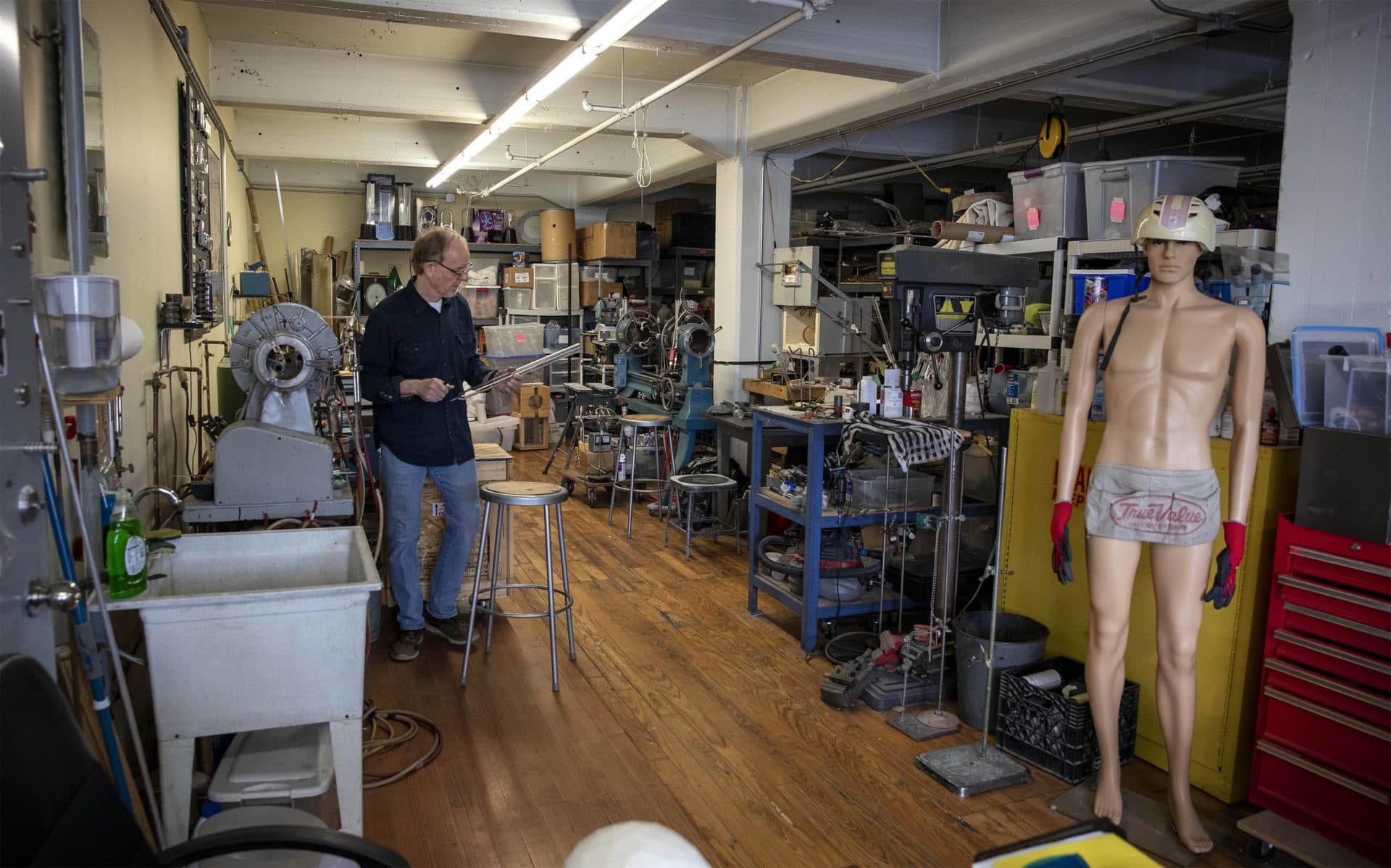 Artist Wayne Strattman at his glass and plasma studio in Boston. (Robin Lubbock/WBUR)

This isn’t the first time Strattman has faced displacement. He was part of a group of artists who won the right to keep their live/work studios in the South End’s Piano Factory after a bitter legal battle in the late ’90s, only to watch the landlord gradually convert the building into luxury apartments.

“Over the years, I’ve testified in front of the city council, written letters, participated in online petitions,” Strattman says. “It’s largely gone unanswered by the city.”

Strattman thinks Boston’s leadership needs to take responsibility for what’s happening to artists. The problem, he says, is worse than it’s ever been. But his impression is that the city has little power to create or preserve space for artists.

“They do a lot of studies and whatnot, and it’s not what we need,” he says. “We don’t need more studies. The problem is obvious.”

Strattman’s story is in many ways emblematic of the experience of creative workers facing the squeeze in Boston’s hot real estate market, where music venues struggle to stay afloat, performers lament the dearth of rehearsal space and developers gobble up the industrial buildings that have long served the city’s painters, sculptors and craftspeople.

And Strattman is right that the city has few tools to help, despite a robust office of arts and culture. The 14-person office has a $3 million dollar operating budget, which it uses to fund artists and cultural organizations, support public art and advocate for arts and culture throughout the city. But only one staffer is focused on the problem of disappearing cultural space — Melissa Meyer, the director of cultural planning. Meyer is often the person to respond to panicked artists worried about their studios going on the market. By then, it’s usually too late for the city to intervene. “By the time people are talking about sale, it’s been sold,” Meyer says. “Or it’s really close to being sold.”

Meyer is hopeful this is about to change. Mayor Michelle Wu’s proposed 2023 budget will allow the office of arts and culture to hire two more staff who can help it get ahead of the displacement problem. One will be a liaison with developers and the city’s planning and development agency. “That’s really almost a full-time job, is keeping up with the development pipeline in the city,” Meyer says. 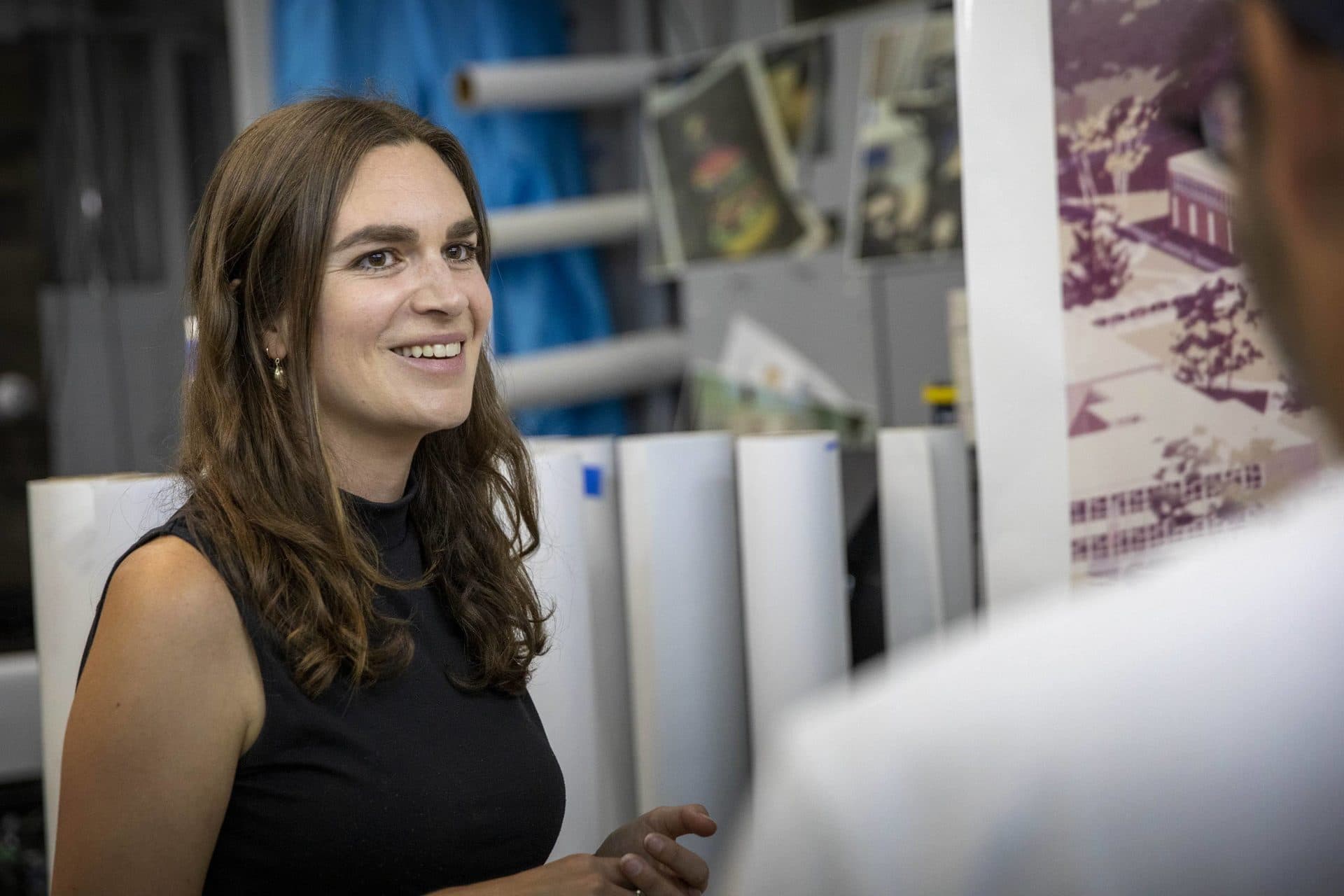 The other new staffer would focus on community engagement, forging relationships with artists and cultural organizations before a crisis hits.

“We really need to be putting a lot of time into: where is cultural work happening now? What does that look like? What’s at risk?” says Boston’s chief of arts and culture, Kara Elliott-Ortega. “You know, how are we building relationships from the ground up so that we understand when a building could be going on the market?”

The office of arts and culture is also set to receive a windfall if a proposal from Mayor Wu passes: $20 million of American Recovery Act funds to be used over three years.

“This would be a historic level of investment in the arts from the city,” Elliott-Ortega says.

The office of arts and culture plans to distribute most of the ARPA money directly to artists and cultural organizations in the form of grants. But the funds are meant to make up for pandemic losses, and are tightly restricted when it comes to capital investments. That means the city can’t use the money to purchase or develop property for the arts — a pretty big caveat for a potentially transformative investment.

“I would love to be able to say we’re going to buy five buildings with this money, and I can’t say that,” Elliott-Ortega says. But she does see the money as an opportunity to access new resources. “The arts office doesn’t have loan officers,” she explains. “We don’t have a roomful of engineers and real estate finance professionals the way maybe some other departments do as a part of their process, because we’ve never had the funding to do real-estate-based work.”

The relief money will also allow the office to reallocate about half a million dollars from the operational budget for cultural facilities grants. These grants could be used to help organizations make improvements to their spaces, or even put money toward securing property. But half a million dollars doesn’t approach the scale of what’s needed. Buying property is expensive — and there is no doubt that the best way to preserve cultural space is to buy it. 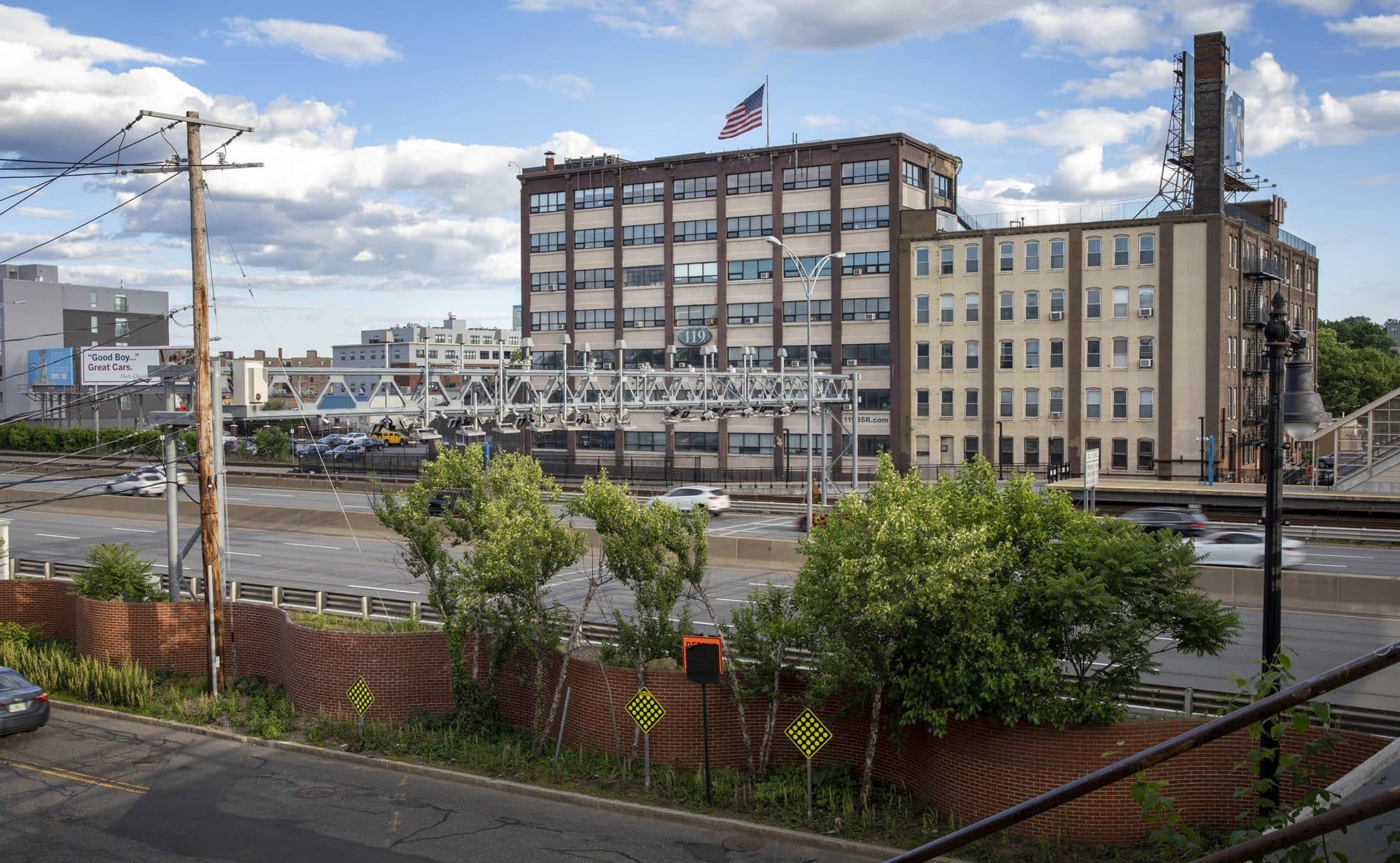 119 Braintree St., a building where many artists currently work, is scheduled to be pulled down for redevelopment. (Robin Lubbock/WBUR)

In the absence of dedicated public funding for arts venues, the office of arts and culture is trying to harness the development boom to benefit artists, and is looking at existing programs to adapt.

For instance, there is a zoning requirement in a section of the South End that compels developers to either incorporate affordable commercial or cultural space into their buildings, or contribute to a fund for cultural and commercial space in the neighborhood. What if the city scaled up a version of this program, and developers across Boston had to contribute to a central fund for preserving and building cultural space?

“If there were no restriction on funds that come out of those projects and we could actually just put them towards a citywide fund, that would be a huge step,” Elliott-Ortega says. 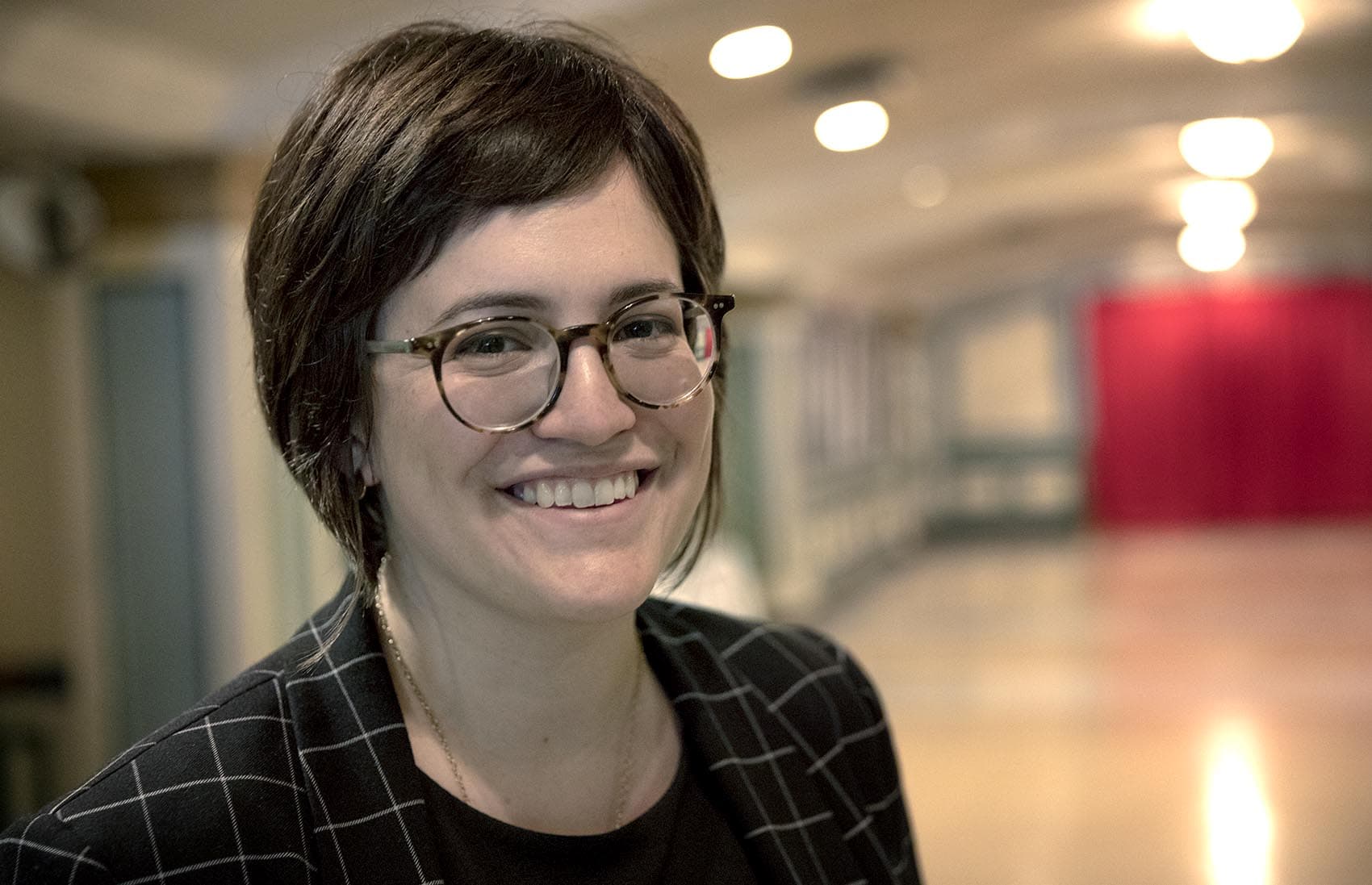 Kara Elliott-Ortega, Boston’s chief of arts and culture at the Strand Theatre in 2019. (Robin Lubbock/WBUR)

A citywide fund would solve two problems. Currently, the city’s main tool for creating cultural space is to ask developers to incorporate it into proposed developments. Often, this results in space that is too small or otherwise inappropriate for the actual needs of artists. “What we’re seeing happen is a lot of eking out these spaces within larger projects, and it’s just never really meeting the need, or [making up for] the loss of space,” Elliott-Ortega says.

With a fund for arts venues, the office of arts and culture could provide grants to artists and cultural organizations trying to buy space, and support them in executing development projects. The money could be invested wherever the need is greatest, not just in places where development is booming.

But perhaps Elliott-Ortega’s greatest hope is for the city to build its own arts center to replace the cultural spaces — studios, rehearsal complexes, music venues — that have been lost. “It would be a big symbol, I hope, for the artist community that the city really cares about this, that we understand the importance of it and that we’re moving kind of the level of resource that’s needed,” she says.

The city is a long way off from being able to execute such a project — years, if not decades, which will be too late for many artists. That is the challenge now confronted by the office of arts and culture as it considers how to make use of increased funding: to figure out a way to preserve, and replace, the cultural space that is rapidly disappearing — before it’s too late for everyone.